'Wildlife Photographer of the Year' -London 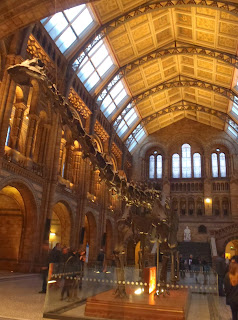 How much: Adult £12, child and concessions £6 (including 10% optional extra donation)

Amazingly, this year was the forth in a row I've managed to see the winners of the 'Wildlife Photographer of the Year' awards and this latest collection certainly did nothing to dislodge its position as my favorite exhibition of all time. Not only are the photos themselves incredible, but the set-up of the exhibition in the Natural History Museum creates a peaceful, soothing environment in which to view them. Beautifully back-lit in a darkened, but spacious side wing, strange but soothing music emanates from the walls, making you feel as if you're wandering around inside a whale's womb.* 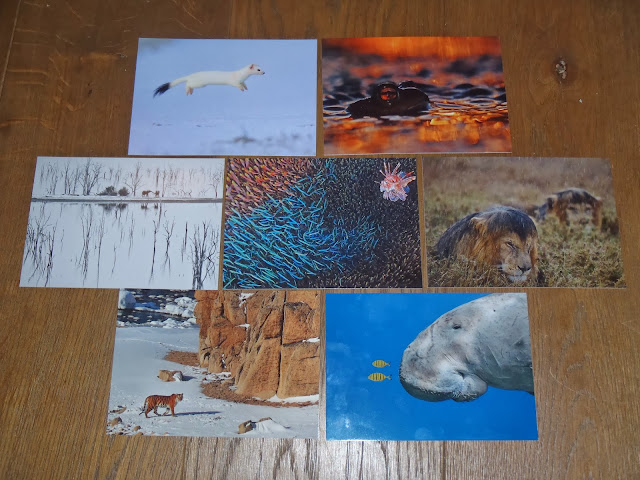 It's almost impossible to discus these photos without being able to include the images themselves, so I've taken a little photo of the postcards of my favorites I brought home with me. Hopefully this wont anger any copyright police too much if I reference each photo below...

In the adult competition, there are different categories for animal portraits and behavior, urban wildlife, plants (or rather more poetically described- 'Botanical Realms'), endangered and threatened wildlife, landscapes, 'Creative Visions' and those taken in black and white, but due to a lifelong obsession with oceans and their various creatures, my particular favorite is always 'Underwater Worlds'.

I'm not sure I agree with the winner of the underwater category this year- Feast of the Ancient Mariner by Brian Skerry. Although this photo captures the unusual sight of a Leatherback Turtle chomping away on a revolting looking pyrosome**, I was much more inspired by the fantastically composed runner up- Lionfish Bait by Alex Tattersall (see middle postcard). This photograph juxtaposes the glistening mass of silversides against a dark background, with the strikingly orange lionfish forming a focal point in the top right hand corner. According to the caption, Alex found around 20 common lionfish in just one of the holds of  the wrecked SS Thistlegorm, which has lain in the Red Sea at the southern tip of the Sinai Peninsula in Egypt since 1941. 'Lionfish bait' then obviously wasn't one of those photos where the photographer had to wait for 27 years in the same mosquito infested treehouse for the one perfect shot they needed, but I'm still beyond impressed at how he has managed to capture all that detail and light without getting annoying reflections back from bubbles and particles in the water. My own attempts at underwater photography look gritty and dull in comparison.

On the other hand, Tiger Untrapped (bottom left), taken in Lazovsky Nature Reserve, Eastern Russia,  is just one of those miraculous, but well deserved shots which took an inhuman amount of patience and resilience to achieve... To achieve this photo, Gerrald Durrell carved out a hole in the snow on the slope of a mountain into which he built himself a hut. He then sat here for the seventy-four days it took him to spot just one of these endangered Siberian tigers. Aged 12, if you'd asked me what my ideal job was I would have told you I'd love to be a wildlife photographer and although this is still true to some extent, I'm not sure in this situation, I could have dealt with the possibility of it all being for nothing while I slowly lost my toes to frostbite.

There's generally nothing more depressing than the young photographers categories (how can a ten year old be so talented???), but we found Freeze frame (top right) too comical to be resentful of. Etienne Francey's leaping white stoat was caught at just the right moment to create this fantastic playful image. Etienne had managed to get two of his photos into the competition, so I'm sure we can expect fantastic things from him in the future.

Whether or not I agree with the actual winners, I'd give my left ear to have the talent and camera to be able to take any one of these photos and left the exhibition with a feeling that is somewhere between admiration and being demoralised. 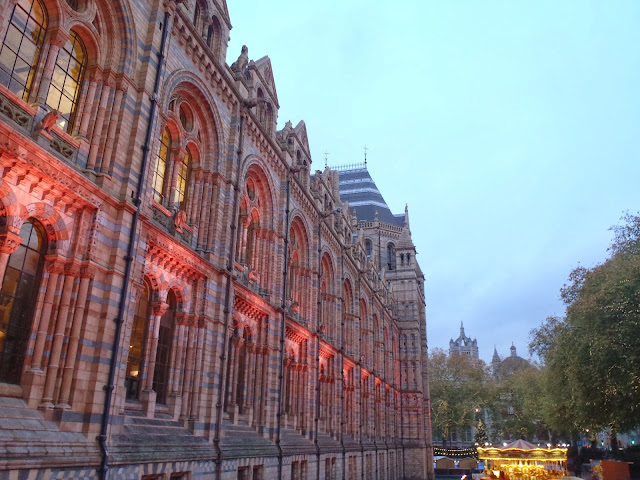 Some other useless, but interesting things I learnt through the exhibition...

Have you been to 'Wildlife Photographer of the Year' before? What did you think?

*Thank you Bryony for this one from the collection of your famous analogies.
**Apparently this is 'A free-floating colony of hundreds of thousands of tiny tunicates (filter-feeding zooids) wrapped in a gelatinous ‘tunic’'