Sydney and its surroundings... a medley

Over the last week, I've helped prepare for and attended a wedding* in the Sutton Forest, spent a couple of days discovering the area around Jervis Bay, enjoyed a family Christmas in Sydney, explored the city a little, visited the Blue Mountains and even tried my best to surf at Manly Beach.

So yes, it's been a bit manic, but we've found some fantastic places, all of which are fairly easily accessible from Sydney...

On our way from the wedding venue to Jervis Bay, we stopped for a little walk along to Fitzroy Falls. The water itself wasn't doing much, but look at the view! 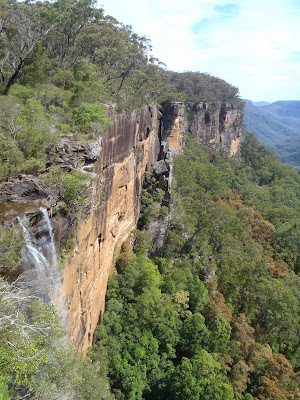 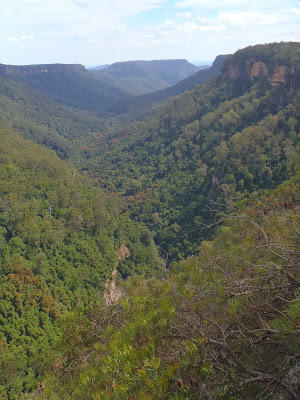 Jervis Bay and around-

Jervis Bay is around 200km down the coast from Sydney. You could hitch, we just bypassed it on our way down to Melbourne as we knew we were coming back.

Dan's parents, Rod and Janet, were kind enough to take us to stay in a house near Jervis Bay just after the wedding. This gave us a little time to explore Booderee National Park and even spot our first kangaroos.

Everybody keeps telling me that kangaroos are everywhere in Australia, but despite looking quite desperately, we hadn't yet managed to spot any. As with the koalas however, I was a little embarrassed by my initial excitement as we came across more and more over the next couple of days. If you're in the area and haven't had any luck yet, a sure place to find them is on the golf course at Sanctuary Point. 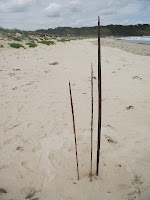 Being driven around in a hire car, it was pretty easy for us to find some of the nicest beaches, but if you don't
have that luxury, there are enough people around that it shouldn't be too hard to get a lift.

My personal favorite was Cave Beach. Being a little walk away from the carpark seems too weed out many of the area's less intrepid tourists, leaving us of the more robust variety to relax in peace, swim in the surf and on this occasion ponder the meaning of these aboriginal objects (any ideas?) standing in the sand.


Other uncrowded beaches include Green Patch and Murray Beach, which are both similar in their pale sand, clear water and lining of forest. From Murray Beach, you can walk to Governors Head and look across to Bowen Island  to spot the little penguins. One of our hitchhiking drivers told us that if you go here in the evening you'll see them fishing. We debated swimming across to get a better view, but I decided that if we were going to be stupid enough to face the possibility
of having to have the coastguards called out, then I'd rather Dan's parents weren't there to witness it.

Hyams Beach, recommended to us by Carmel, was a little less quiet than the others we found, but (according to the locals) it has the whitest sand on Earth. In fact, on an overcast day when the sky and sea are just as light as the sand, the whole effect is very surreal and you feel as if you are wandering around in some sort of blindingly bright dream.

My main advise for visiting Hyams beach, other than trying not to go in holiday season, is to wear sunglasses as I'm pretty sure I've gained a wrinkle from the squinting.


A family Christmas in Sydney-

Being  in Sydney for Christmas was strange as I've never been away from my family/England for these festivities, but Bridget's family made us really welcome and it was interesting to see how it's done on the other side of the globe. Comfortingly, excluding the temperature, the day was a similar whirlwind of the present exchanging, game playing and glutenous eating that I'm used to back home. The all-important dinner, lovingly prepared by a couple of hardworking ladies, was a little different than what we would traditionally have in Britain, but very tasty and it's pretty obvious why salad is more popular than roast potatoes in this heat. It was hard enough to move afterwards even without the pigs in blankets!

There were also a couple of nice traditions that I hadn't encountered before... firstly, and most excitingly for a poverty stricken vagabond like myself, was the distribution of scratchcards to everyone at the table. The rules are that if you win over $500 (I think) then you share it with the table, but anything less than that you keep. I WON $10!!! So yes, that was very exciting indeed. The other tradition, was to hide a set of fortune coins in everyone's Christmas pudding. Now, I've come across people who hide one coin before, but this set, with different pieces for things like 'marriage', 'wealth' and 'peace' make everyone at the table feel like they are the lucky one (Dan and I were happy to avoid the marriage coin- there have been enough comments since Ben and Bridget's wedding as it was!). They didn't set the pudding on fire, but then Australians aren't known for wasting their alcohol. 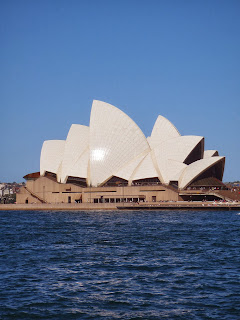 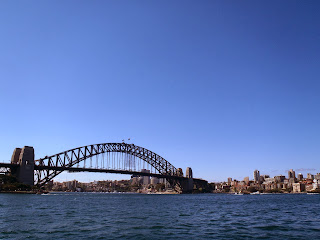 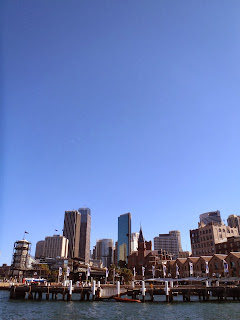 Exploring the city on Boxing Day- so much blue sky!

Dan and I had one spare day before we had to fly out, so we set out 'early'**. A day isn't long enough to do the Blue Mountains justice, but we had a good (if a bit sweaty) time walking from the Three Sisters, down the Giant Steps (there's  more than 800 of them), through the rainforest below and then up more steps the other side. The Three Sisters lookout platform was absolutely rammed with tourists (it is holiday season after all), but as usual, the further we walked, the less people we found,so that seems to be the way to escape.

I'd imagine you'd have a much more peaceful time elsewhere in the Blue Mountains if you had longer to explore. It would also be a great place to hike and camp as there are plenty of trails and alternative places to explore. 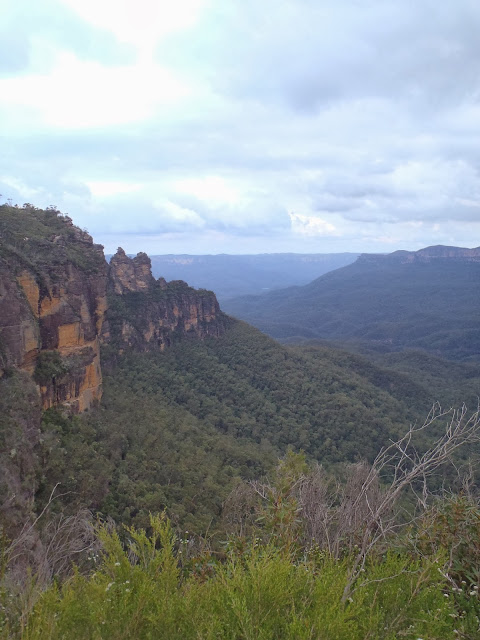 Back in Sydney, Ben and Bridget brightened our end of holiday blues by taking us for an early morning surf on Manly Beach. The waves were pretty small, but as the only person there who really had no clue about what they were doing, I was secretly glad... Manly seems like a pretty cool area of town to live in (I can imagine commuting to work on the ferry across Sydney Harbour would be a difficult thing to get tired of) so I hope Ben and Bridget move there eventually and we can visit again!

Now, going a little stir crazy in Sydney airport (which has free wi-fi by the way), I'm tentatively considering how feasible hitchhiking around the whole of Australia would be. Next time I'm in the area...


*Dan's brother Ben was getting married to the lovely Bridget (hence the actual important reason behind our trip). Congratulations guys, your wedding was beautiful and I'm so happy I was able to be a part of it.
**Ok, I think it might have been more like 10.30am...

Do you have any other suggestions for escaping the city? Leave a comment below. :)