Excluding a train journey to Dapto, which we needed in order to escape the massive freeways out of Sydney, Dan and I managed to successfully travel from Sydney to Melbourne, over the course of five days, without paying for either any transport or accommodation...

We're pretty happy about that!

As you can imagine, this lead to a few interesting situations over the course of journey- have a look at our route on my carefully crafted map at the  bottom of this post.

Dapto itself was not an encouraging place to begin;  most people looked at us as if we were clinically insane, some gestured wildly and one even swore at us out the window. Nevertheless we were picked up within half an hour and our first friendly driver took us twenty kilometers down the road- not a monumental start, but after our faffing in Sydney, it was already quite late by the time we arrived in Kiama.

Debilitated by jetlag, heavy bags and indecisiveness, we trekked around and eventually out of the town until we were desperate enough to camp in an empty field, on a hill, right on top of a lumpy horse poo. With me being too cocky to bring a sleeping bag (it would be hot in Australia surely), Dan having lost his roll mat on the flight, a tent too short for him to lie flat in and both of us being to exhausted to get our stuff into any sort of organised state, that night was never going to go well. With the additional fear of being discovered  and a river of condensation running freely off the sides of our tent, it was a disaster.

Consequently, we were up and packed by five am and on the road again by six. Unfortunately, we beat the cars and had to wait a while for our first ten kilometer lift down the road. The truck driver who finally picked us up did little to instill us with confidence...

We probably wouldn't have any luck from now on... Could he drop us off at a train station?

Thankfully we weren't deterred and only had to wait twenty minutes for our next lift. This was our big break! Adam drove us a couple of hundred kilometers, gave us a little tour of Mollimuck, showed us his amazing beach at Rosedale and even took us to have coffee with his friends at Mossey Point. He finally left us in Moruya where we were picked up by a man with a goats skull in his back window, and a sharks jaw hanging from his rear view mirror, who drove us to Narooma.

By now, we'd been driving through forest for most of the day, so it seemed a logical step to try and camp in a disused picnic area or something similar and we planned to simply hitch out of town to a suitable spot and stop there for the night. Our next driver however had other ideas...

The lady who picked
us up, henceforth to be referred to as 'Crazy Woman', was a tornado of high-speed chatter, dubious advise and misplaced helpfulness. Before we knew it, she was driving us off the Princes Highway to meet her friends, taking us to the beach for a swim and expecting us to camp in her garden that night. The surf at Bermagui, was a welcome refreshment, but after an hour or so in her company our ears were ringing and we craved a quiet spot for the night. It's quite awkward to turn down hospitality in these sorts of situations, but luckily Dan was a little more forthright than me and just diplomatic enough to persuade her that we might look for somewhere to camp on the beach instead.

Thankfully, instead of taking the hump, she drove us around on a whirlwind tour of the area in search of somewhere to pitch up. Longswamp beach seemed perfect: endless, beautiful and most importantly empty, we said our goodbyes, waited until dark and built a fire to cook our noodles on while we hid our little tent in the dunes. Upon waking up at 4.30 again, the morning's sunrise persuaded us beyond a doubt that Crazy Woman had done us a favour even if it wasn't exactly in the way she first intended.


It was however, a sleepy Sunday and we'd left the highway to join the somewhat deserted coastal road along the Sapphire Coast, so leaving Bermagui was a bit of a challenge in itself... The day progressed in a series of hot walks, beautiful beaches and ten kilometer rides down the road. The four lifts it took us to get to Merimbula and back onto the highway showed us the most beautiful stretches of coastline we'd explored so far- getting rides with locals is fantastic as they seem to love showing of their favorite places. This way, we got to see several amazing beaches we'd never have found on our own and the nice lady who drove us the final stretch into Merimbula even gave us a tour of the whole town, showed us the view from the headland and dropped us in a handy lay-by on the highway.


I was sad to leave the coastal road, but we had no trouble getting a couple of lifts to Eden where, to our delight, we were shown a free BBQ. This was a very exciting discovery as we've still not managed to find the right gas for my stove and have been eating primarily cheese sandwiches, so we cooked up a feast of hotdogs to sustain us for the evening.

...Little did we know how much we were going to need that energy for the next few hours. 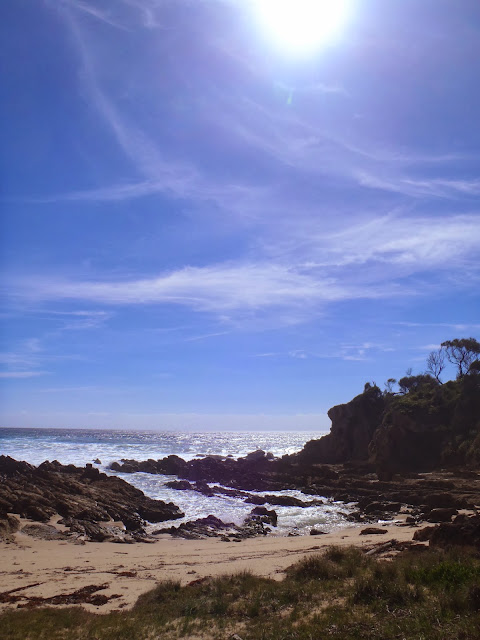 By now, we'd had a long, hot day and were really just looking for somewhere to sleep again. We'd got this far without paying for a pitch and were loathed to start now, so we trekked up the massive hill, out of Eden, and began trying to catch another ride. Unfortunately, it wasn't happening and tired, hot and impatient, we gave up after about half an hour and began trekking down the highway in the hopes of camping at the next little beach.

The Princes Highway is not designed for pedestrians and skirting along the metal barrier next to a vertical
drop into the forest below would have been off-putting enough, even if it wasn't for the heat, and the bags, and the flies. My back was hurting, Dan's foot was hurting and we weren't drinking enough water, but our unreliable tourist map assured us that the beach was just around the corner...

or was it the next corner...

maybe just around this next bend?!

Eventually we found it: Quarrentine Bay, but crushing all our hopes, we discovered it was a Yacht club. By now, I felt like I had a touch of sunstroke and desperation was setting in for both of us. We were just discussing our possibilities when a car slowed down to a stop beside us...

Ted was our savior that evening. He gave us a room for the night, some proper food and a copious amount of his home made gin, all without murdering us in our beds, and for that I will be eternally grateful. His property was amazing (you can see where it was on the map below) and he showed us his many boats, dogs and cows, while recounting his rather exciting life story. If his stories are to be trusted, he was a landscape gardener who had designed zoos, had traveled the world extensively, was a lawyer, had circumnavigated Australia in a matter of days on a moterbike, built boats, was a farmer and had a close friend in the Lord of Chester. To be honest, I couldn't care less how much of this was true as he'd saved us from the 'Walk of Death' and dropped us off at the nearest 'town' in the morning.


The thriving metropolis of Genoa consisted of around two houses, a pub and a closed cafe, which we stood across the road from for a couple of hours as the wind got up and it began to rain a little. It's surprisingly cold down here sometimes, but I didn't want to wear my trousers in fear of looking like too much of a hippy and missing out on lifts. After a two hours, a helpful, but disproving lady came over to tell us of our idiocy- we wouldn't have any luck waiting there. Apparently there was a storm brewing- she obviously didn't think much of our nonchalant attitude, it 'wasn't funny', but we could shelter in her closed cafe if we were still there in two hours. Another van entitled 'Queens Kebabs' stopped and inform us that they were driving to Melborne the next day if we were still there then.

All in all, this wasn't very encouraging...

We were just beginning to give up hope when a couple of hill-billies, a man with one tooth and a tiny lady in the passenger seat, pulled over to let us in. For the next couple of hundred kilometers, we were regaled with tales of his encounters with the police, a variety of racist remarks and other interesting opinions which we hadn't encountered much since getting into the country. At one point I thought we might have broken his car boot and was wondering if we were going to have to make a run for it, but thankfully it was fine and they were nothing but helpful all the way, showing us the view over Lakes Entrance and dropping us off at a tourist information.The pair were travelling all the way to Melbourne, but we were unwilling to end our adventure so soon and asked to get out in Sale in the hopes of travelling along the coast.

From here, life was a bit miserable for a while. It was raining and we were cold, but we eventually got a few lifts down to Seaspray, a dead end town on Ninety-Mile Beach. We camped in an abandoned campsite, under a tree, next to a bin and slept very little in our damp clothes and too little bedding in fear of being turfed out at any moment.


We had little more luck the next morning, initially stuck in a dead-end town, then in the lay-by of an apparently unpopular stretch of highway for several hours, massacred by flies, chilly and damp, we were getting a bit grumpy. Eventually, we gave up, caught a lift back to Sale in the hopes of catching a lift along the Princes Highway again. Having achieved very little on our excursion away from the main road, it was a bit depressing to watch car after car drive past, knowing that if only we had stayed with the hill-billies, we could have been in Melbourne by then.

We needed a big break to cheer us up again and it came in a most unexpected form... Queens Kebabs!!! They recognised us and stopped right in the middle of the highway regardless of other traffic. The two Turkish men waited for us to run up to them before driving us, sat on their fishing gear in the back of the van, all the way into the city. 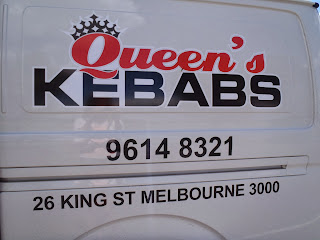 With our friends Karl and Sarah to stay with in Melbourne, our problems were over for now and we could relax in the knowledge that we'd proved wrong the naysayers.