Hitchhiking in Australia- some Feathery tips...

1. Don't look like a tramp! People can be pretty suspicious and if they think you might be smelly, thieving or murderous, you've got no chance. Don't smoke as it's really frowned upon by a lot of people here and if you're a mixed couple, get the girl to stand in front (we are less intimidating and people tend to feel a bit more sorry for us). 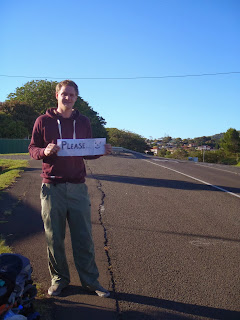 2. Don't BE smelly (or thieving and murderous). You'll give us a bad name and people will make excuses to get you out of their car early.

3. Keep on smiling however fed up you're feeling- nobody is going to pick up a grumpy hitchhiker. If you have time, make a humorous sign to hold up to attract their attention.

4. Make sure you actually are good company once you get a lift. Ask lots of questions (in a non-interigatory fashion) to avoid awkward silences.


5. Stand at the beginning of a space long enough for cars to pull in off the road without being in danger of the car behind smashing into them. This is obviously particularly important on fast highways and don't even try to hitch from the massive freeways around city centers unless you want to die. 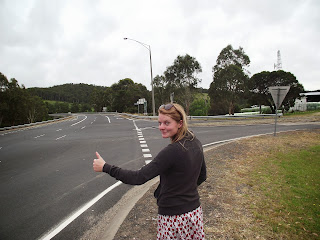 6. Don't stand in the road. I'm pretty sure it's illegal and even if not, just pretty damn stupid.

7. If you're having trouble getting a lift, be flexible. Is there a nearby town in another direction that it might be easier to get a lift from?

8. Be patient. You're getting a free ride- it's not supposed to be that easy.

9. Be safe! Mixed gender couples work best for maximum safety/amount of lifts, but two people is always better than one.

10. If you feel unsafe, ask them to stop... if they won't and you're really scared, one man suggested to us that we should slam the handbrake on and run in different directions. I'm not sure how cool I am condoning that- make sure there are no cars behind! Probably a better suggestion would be to either make, or pretend to make, a phonecall to somebody saying where you are. The emergency number is 000 here, but don't worry, you really wont need it!

For some detailed information have a look on- http://hitchwiki.org/en/Australia