This is another travel flashback, this time to 2009. My thinking is that if I could travel around Italy on the cheap age 17, then it should be possible for everyone.

My friend Caitlin and I had been planning our adventure long in advance- we knew our route (Milan, Verona, Venice, Florence, Rome, Pisa and then La Spetzia by the sea), had bought our inter-rail tickets and saved as much money as physically possible as a waitress earning £3.75 an hour while still at school. Needless to say, Italy probably wasn't the best choice of low-budget destination, but young and enthusiastic we were lured by the promise of ancient architecture, romantic language and plentiful sunshine. The fact that Italy's wine was one of the only things actually cheaper than in the UK was just an added bonus!

Although hostels can be a cheap form of accommodation, those in the major Italian cities were still a little out of our price range. Instead, we decided to camp and surprisingly found convenient(ish) campsites everywhere we wanted to visit.

If I was to visit Italy again now (hopefully some time in the not too distant future), I'd probably try and hitchhike, couch-surf and visit some of the smaller towns and countryside in order to make my money stretch further, but as a first attempt at travelling on the cheap this wasn't bad.

This was a disaster. We'd hopped off the train with a plan to quickly have a look at the amphitheatre before heading to Venice to set up camp. Unfortunately, we weren't as organised as we had first thought... with no map, no money for taxi's and heavy bags we wandered aimlessly in the forty degree heat, too scared to ask for directions until it was time to catch the next train.

Not a promising start, but thankfully that was our last major disaster (excluding an encounter with a definite paedophile in Rome).

I'm always fascinated with coastal cities and Venice goes one step further by being built into the water itself. If you're anything like me you'll probably spend most of your time here lost, but only away from the central Piazza San Marco will you find the most interesting little alleyways, quiet canals and the cheapest gelato. The lemon sorbet alone is refreshing enough to sustain you until your find your way back to a water-taxi. 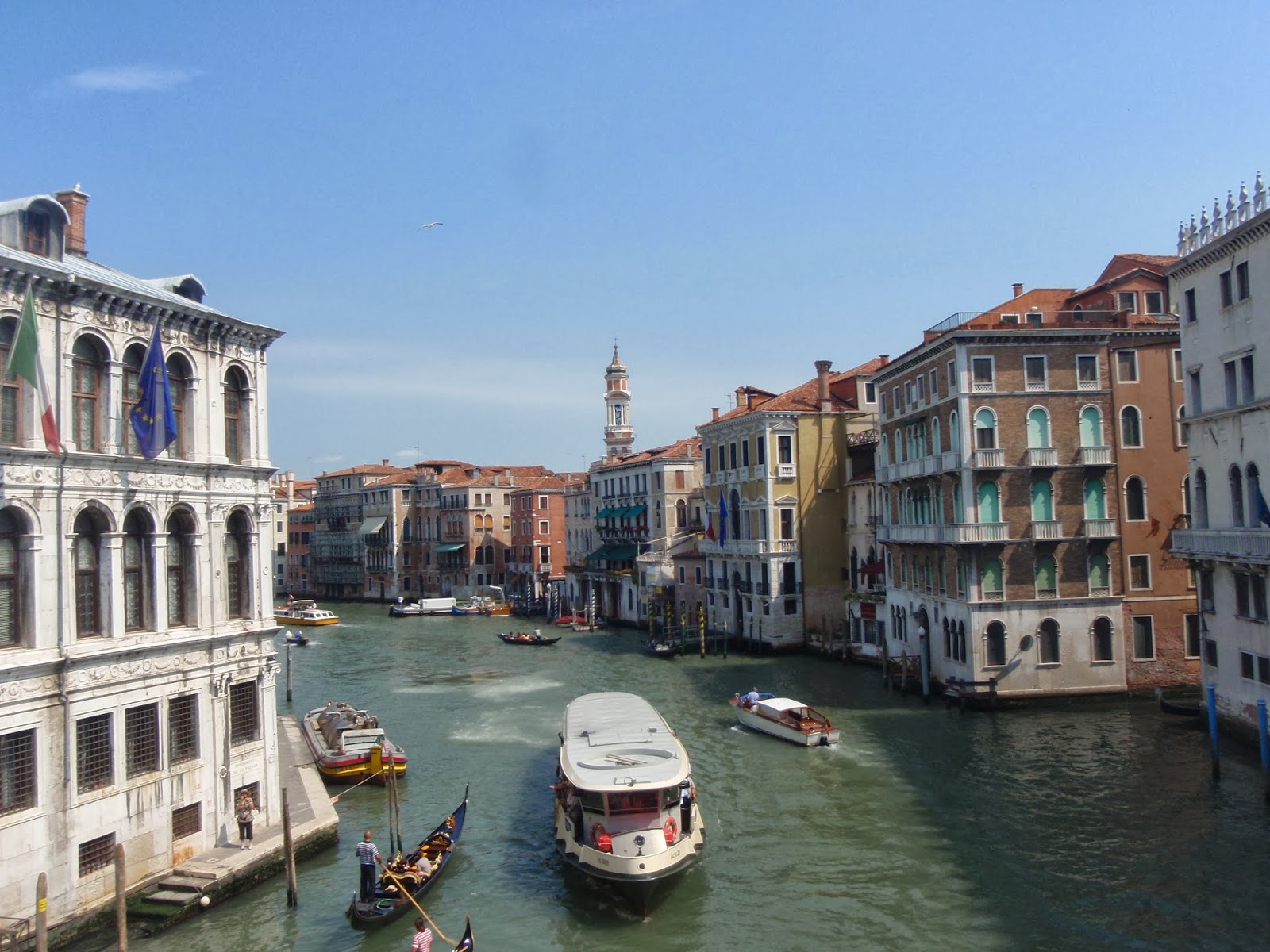 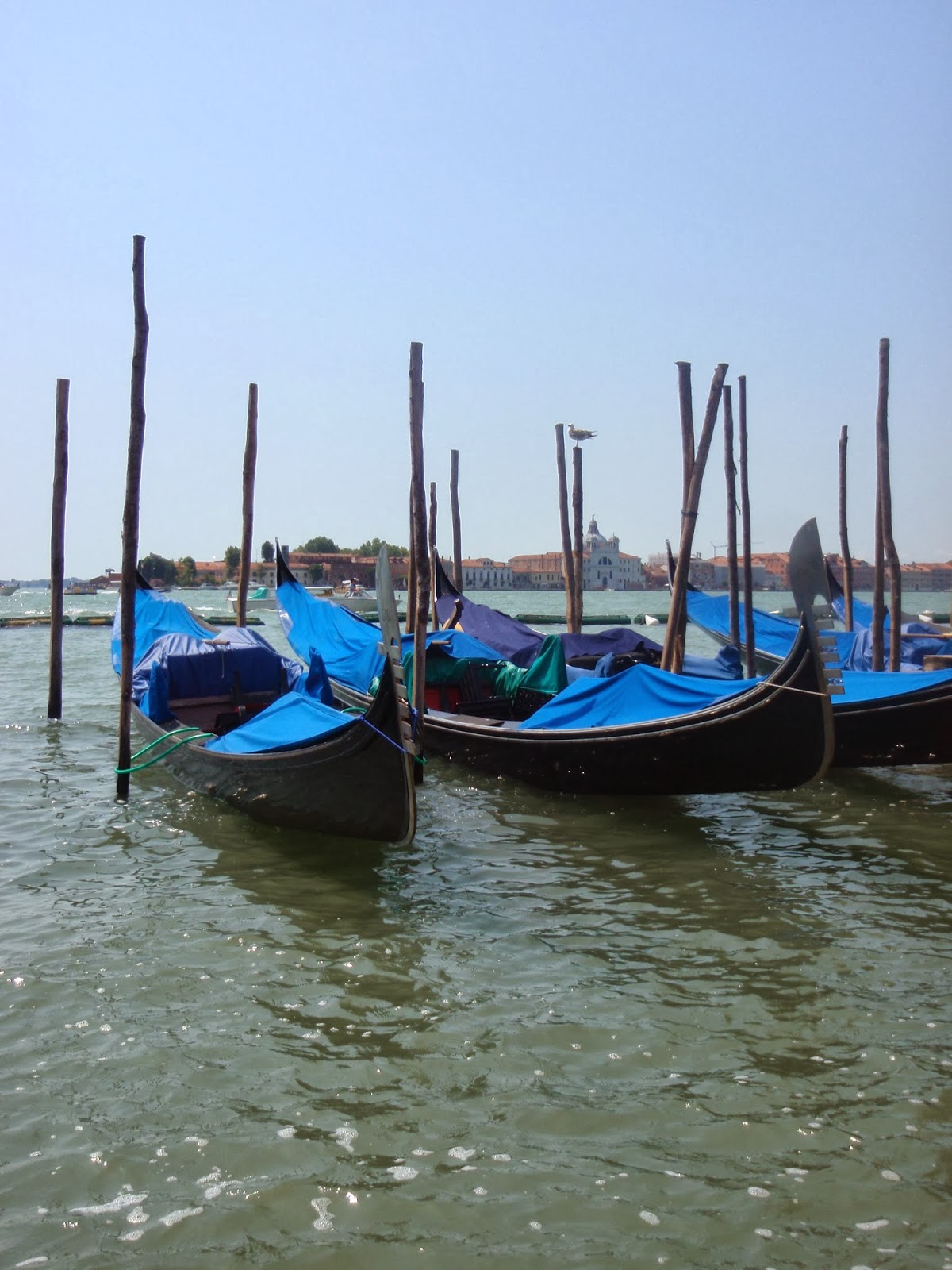 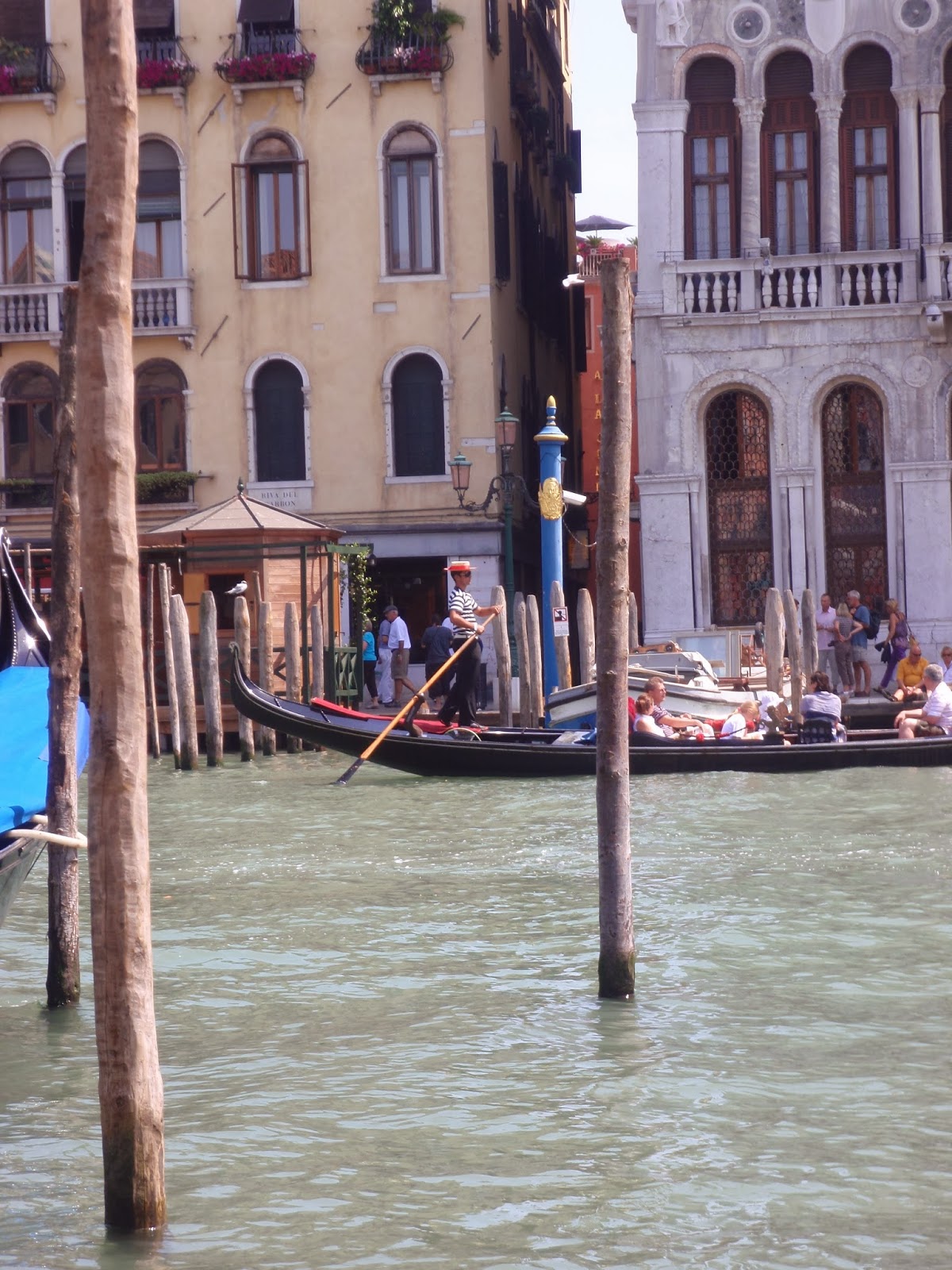 Ok, sorry, went a little crazy with the canal photos- just one more! 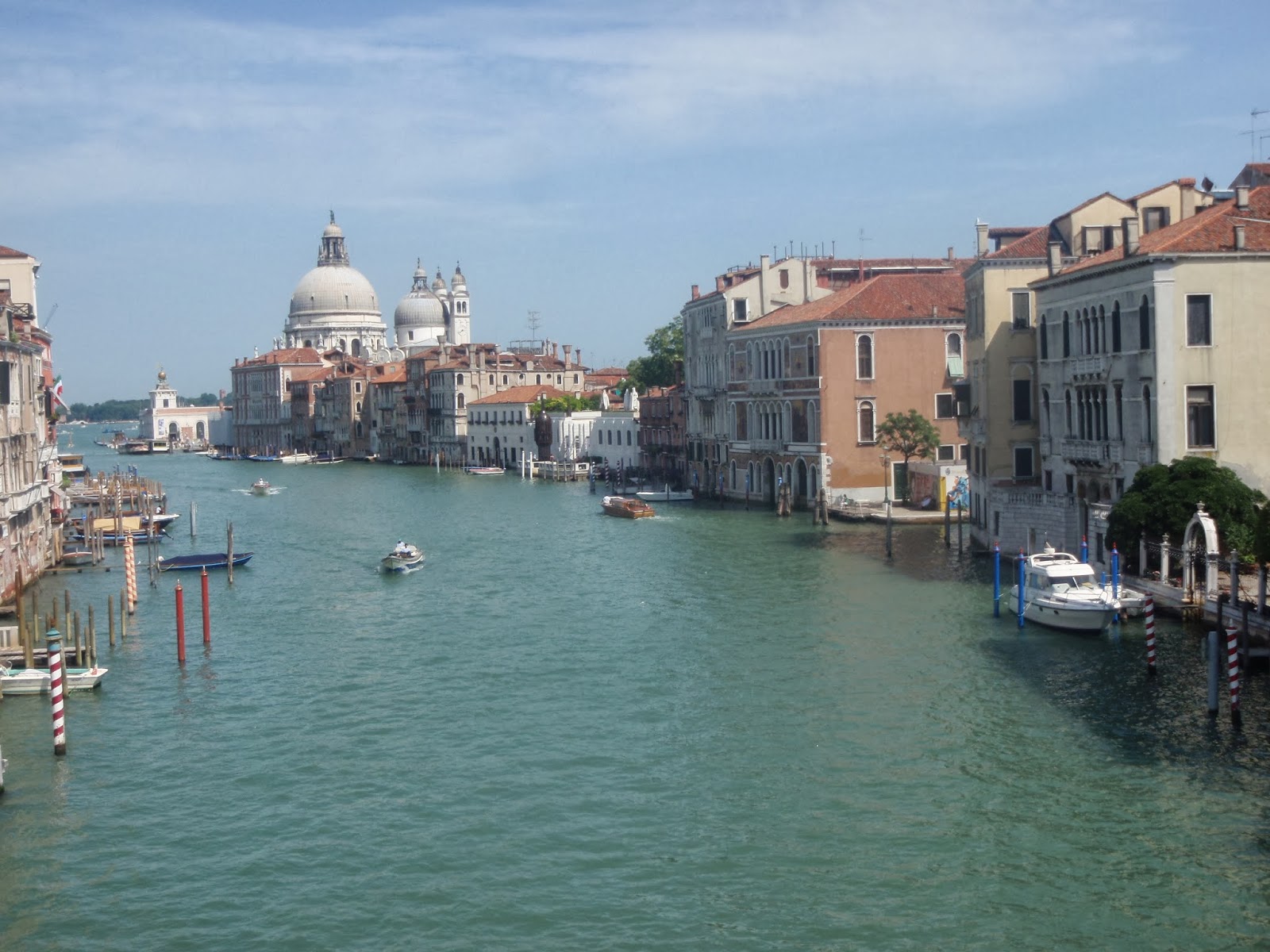 My (and many other people's) favourite of Italy's famous cities is undoubtedly Florence. Smaller and not as aggressive than Rome, with less tour groups than Venice, but still steeped in history, art and culture, Florence is a city for relaxing in coffee shops- probably watching attractive Italian people walk past.

Art nerds will enjoy the Uffizi gallery, which boasts a pretty exciting array of work (including that of Botticelli, Michelangelo, Raphael, Rembrandt and even a bit of Leonardo da Vinci). It only costs €3.50 if you're a youngster under twenty-five, just remember it's shut on Mondays and the line can be pretty long so get there early. 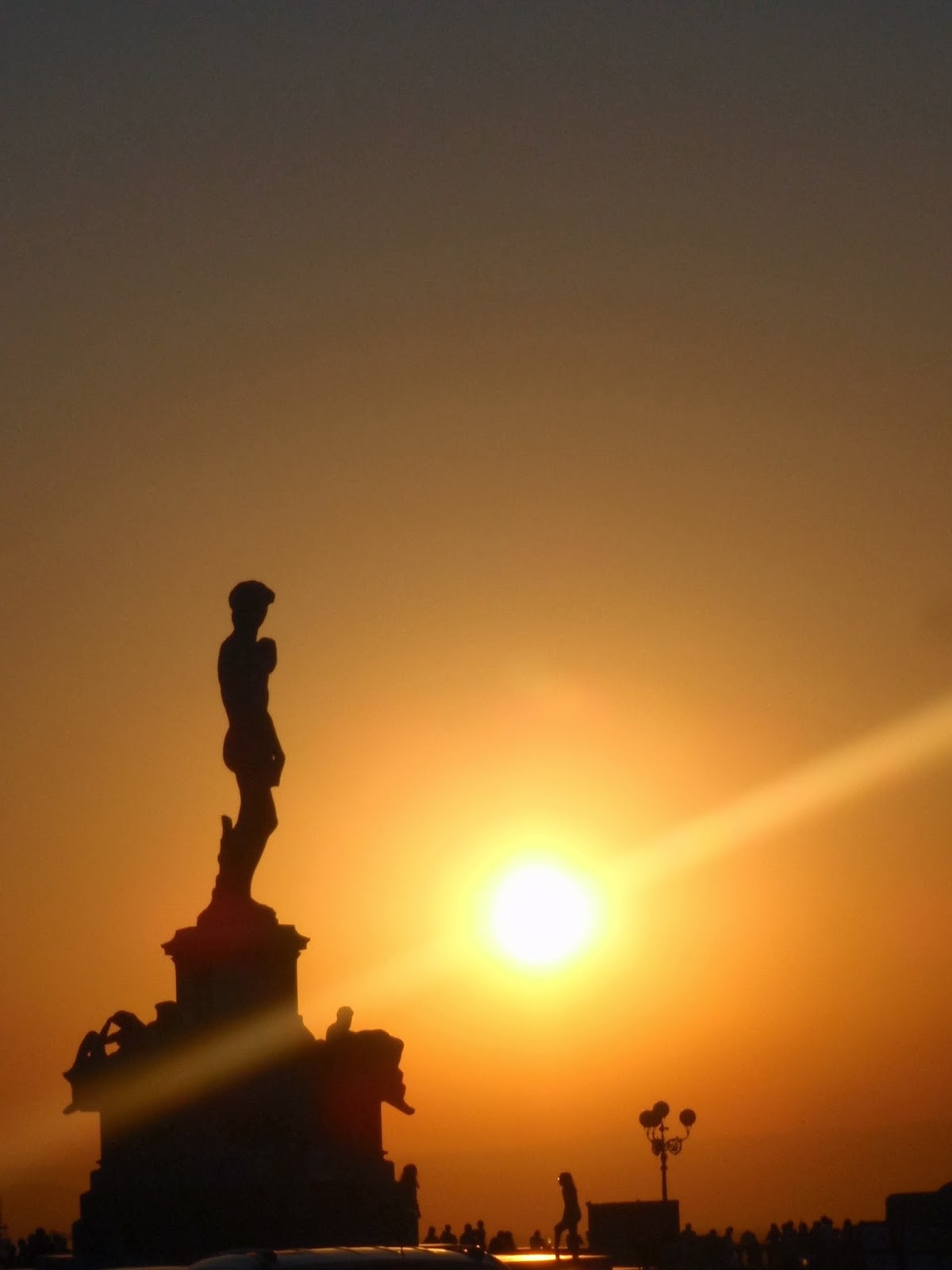 Above: There are several David's in Florence. This isn't Michelangelo's original, but it's the only one you can see with a sunset! 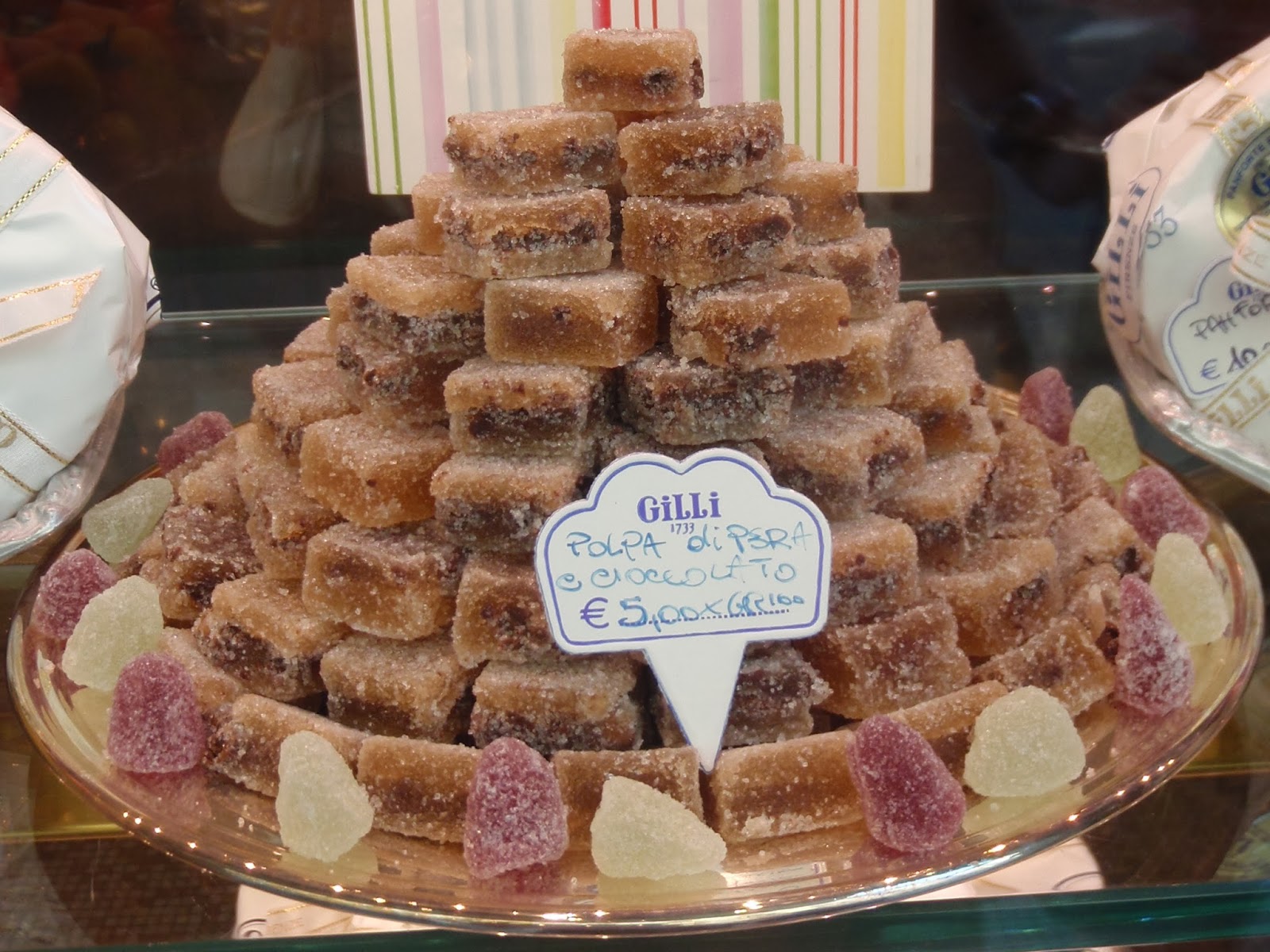 Everything in Florence looks good enough to eat your own body-weight in, but we survived mostly by cooking our own supermarket tagliatelle and settled for staring longingly through shop windows. 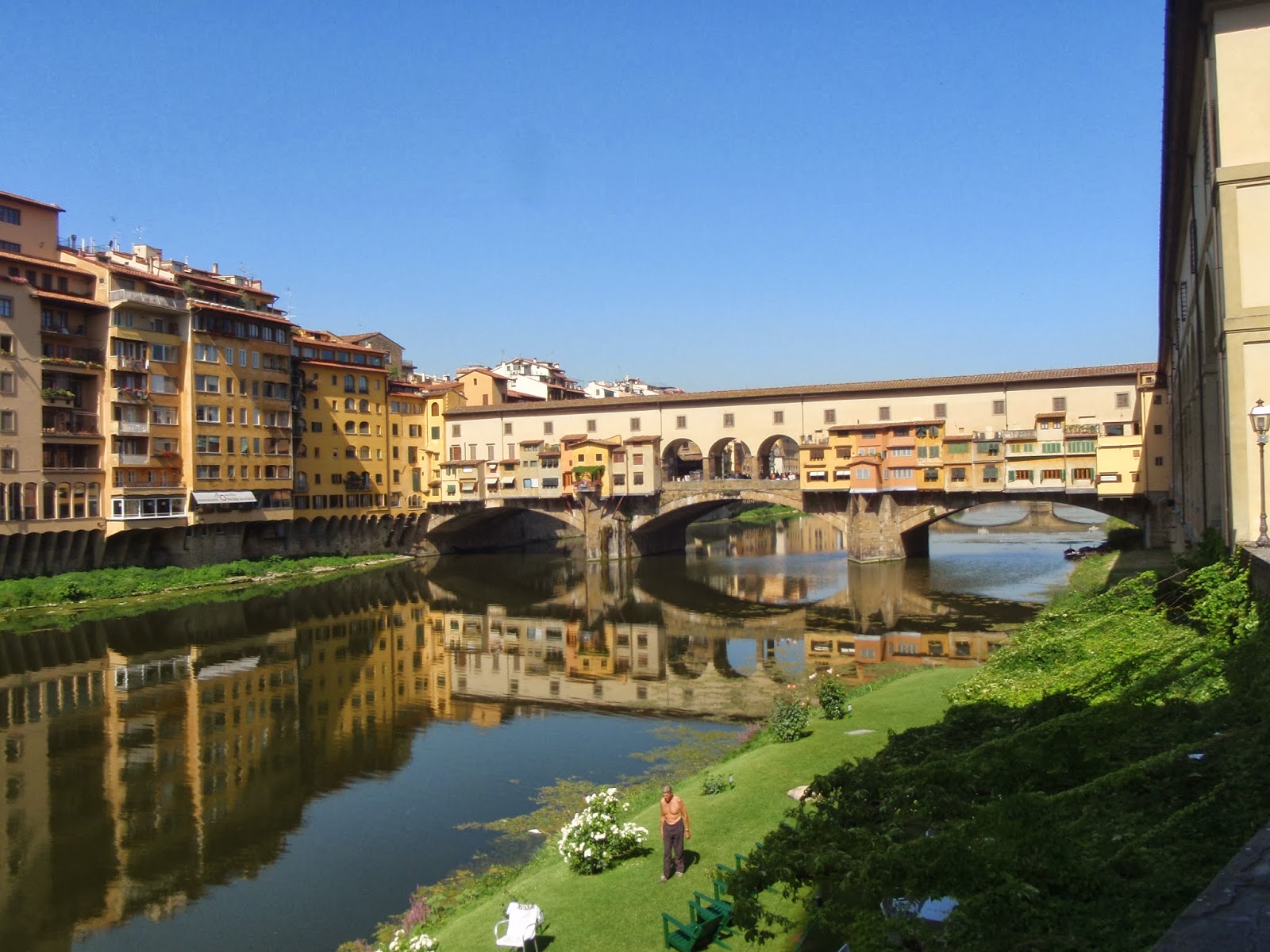 The Ponte Vecchio (above and below), built in 1345, is one of Florence's famous landmarks. Seems like an excellent backdrop for a little topless gardening. ^ 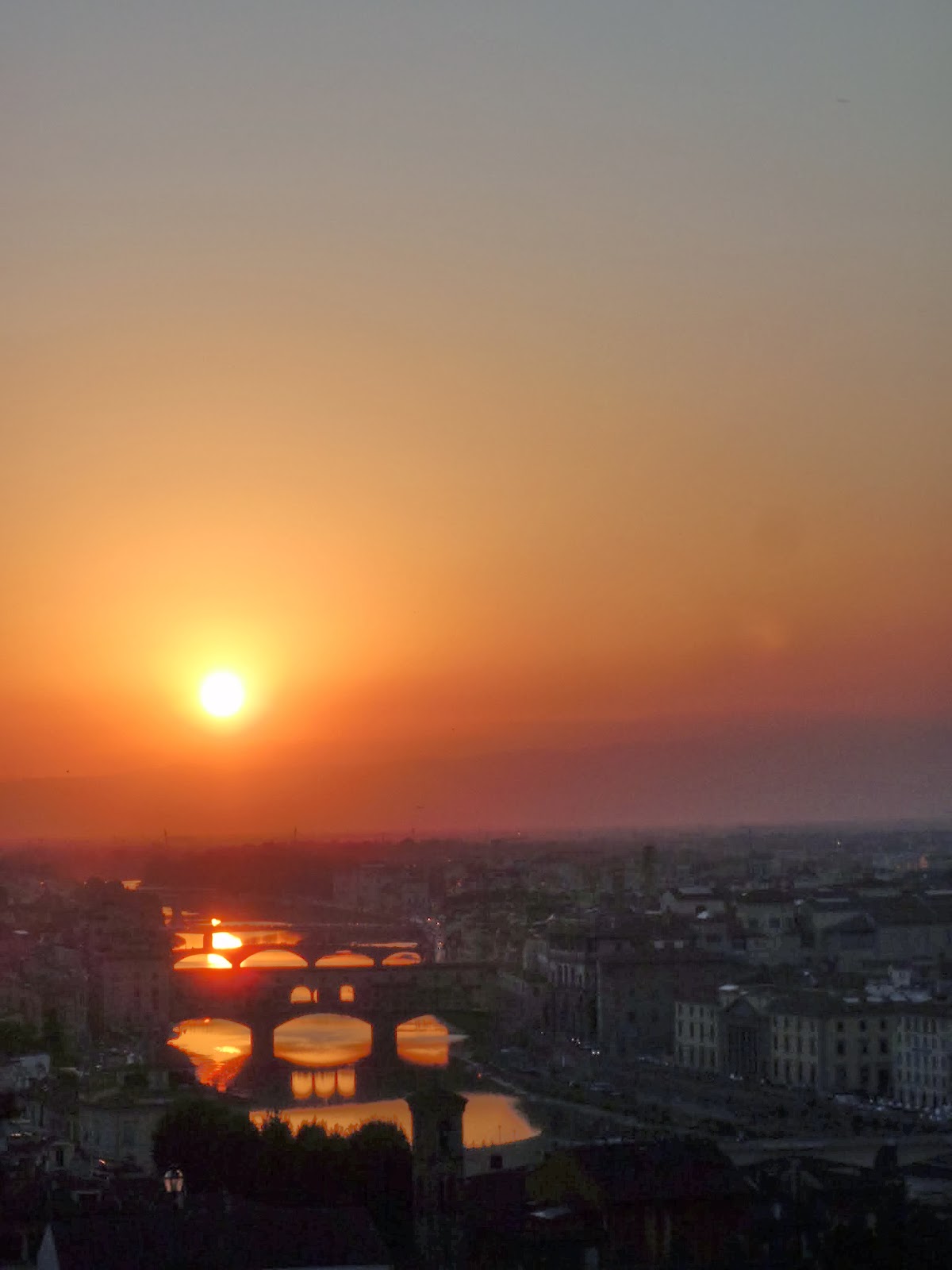 The view from our campsite was incredible, but the massive hill to up get there meant we probably earned it. 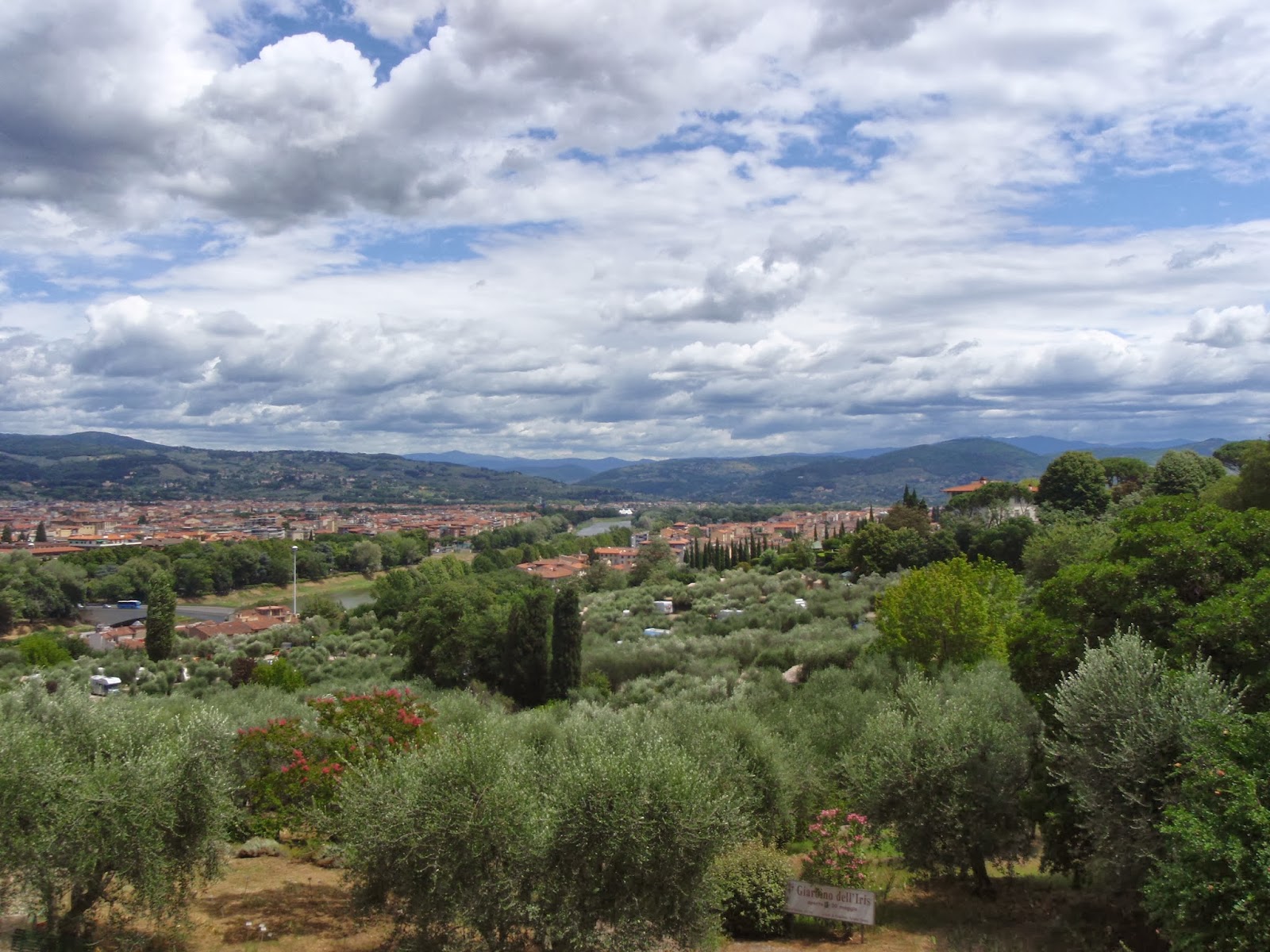 Home to Italy's biggest famous sights, most terrifying pedestrian crossings and pushiest sales-people, Rome can be a little overwhelming. The campsite was pretty fancy, but inconviniently far away from the city center, relitively expensive and unfortunatly home to the creepiest man in Itlay. We left two days early to escape his leaturous advances!

Rome's boisterous, but I found not even the crowds could ruin the sight of a two-thousand year old building on the scale of the Colosseum...

AKA- Flavian Amphitheatre
Why is it so special?- It was the largest amphitheatre of the Roman Empire, is considered to be one of the greatest ever Roman works of architecture and engineering and is still the largest amphitheatre in the world.
Who built it?- The emperor Vespasian started building the Colosseum in 70 AD, then his heir Titus completed it in 80 AD. Further modifications were made by Domitian, Titus' successor. These three emperors are known as the Flavian hence the name 'Flavian Amphitheatre'.
What was it used for?- The Colosseum had a capacity of 50,000 to 80,000, and was used for spectacles such as gladiator fights.
Why is it in such a state?!- A combination of earthquakes and stone-robbers (yes that was a thing...). Give it some slack though, it's pretty old! 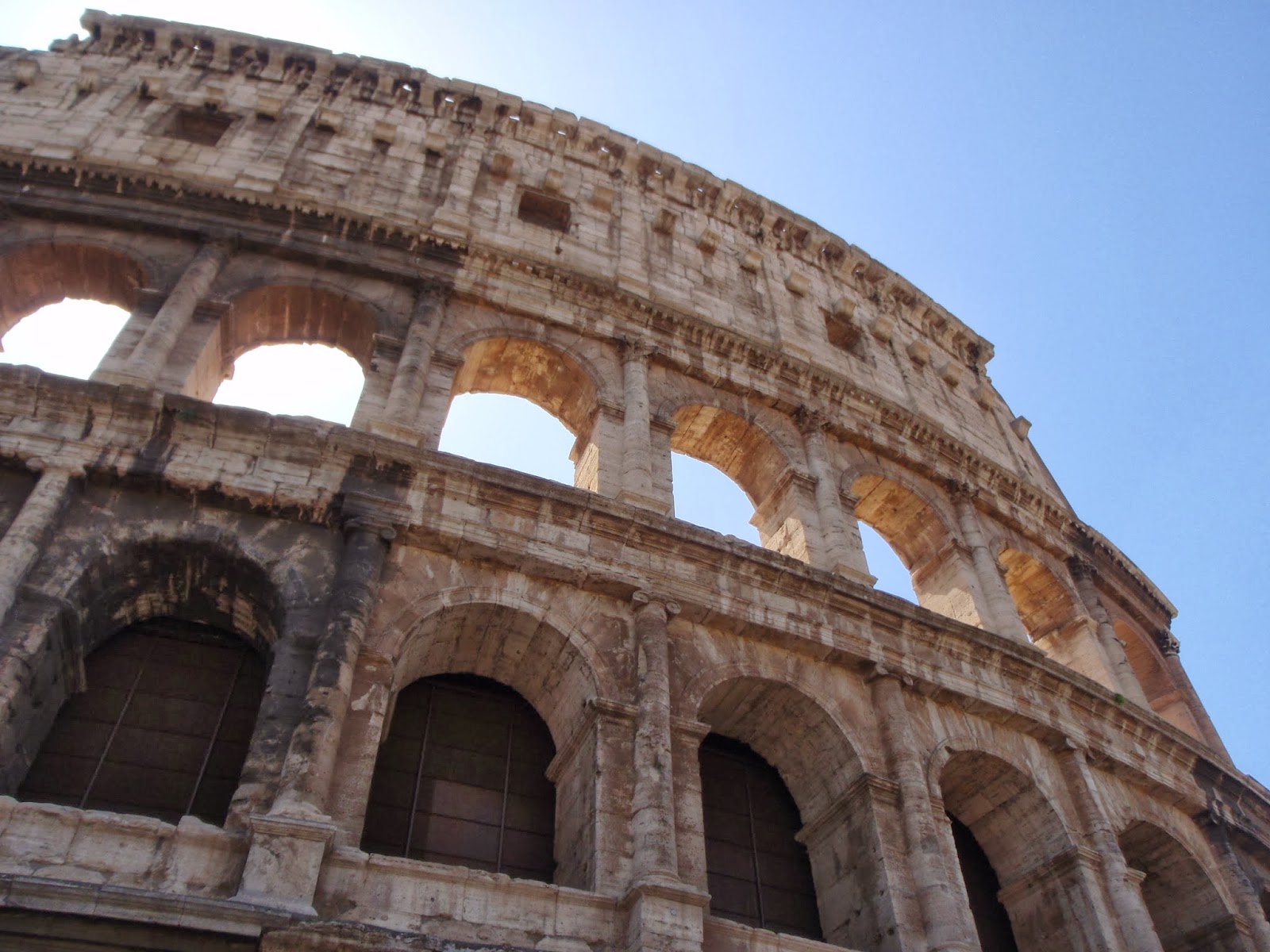 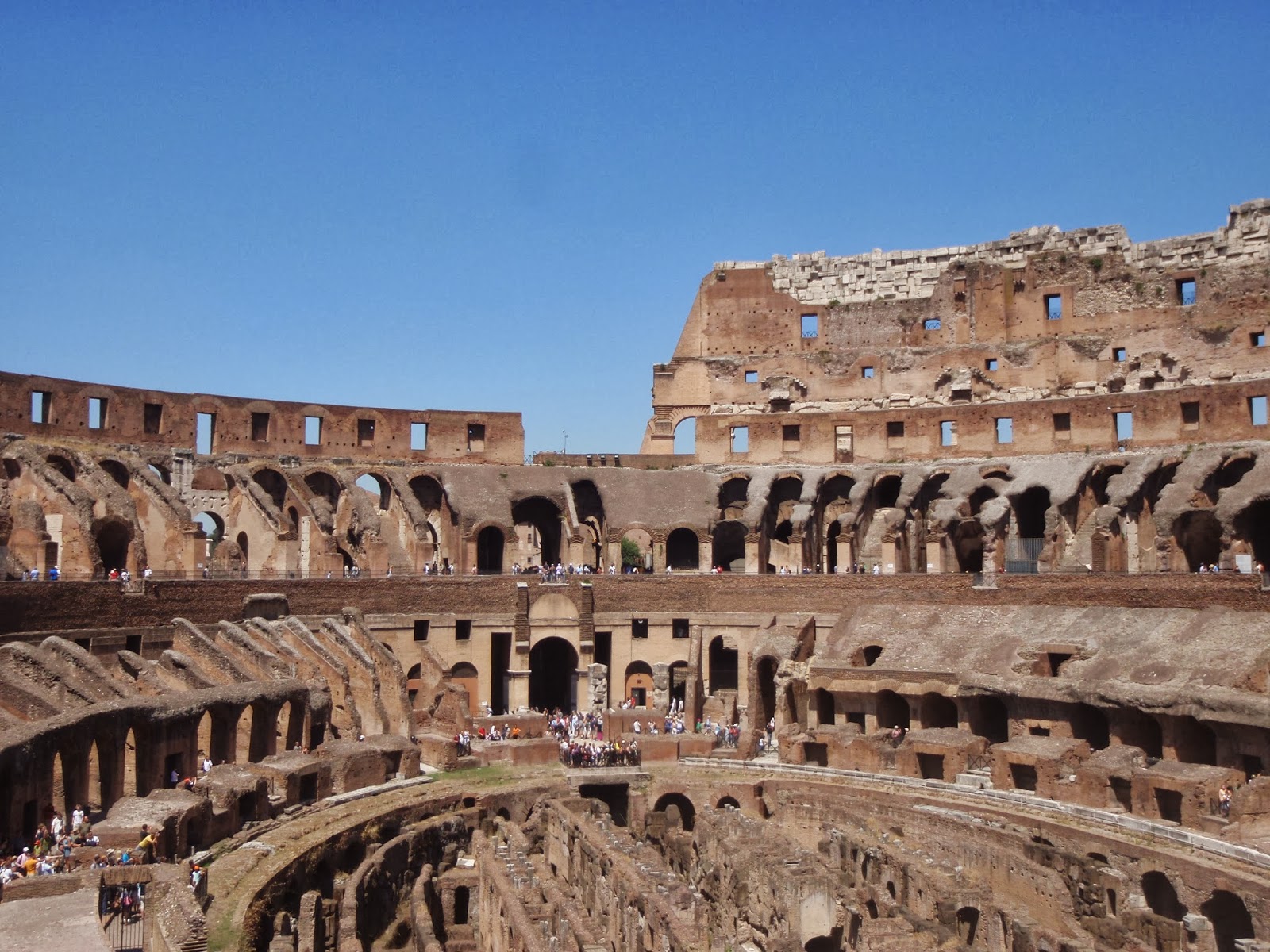 So, how old is the Colosseum compared to some of the Earth's other big stone things? 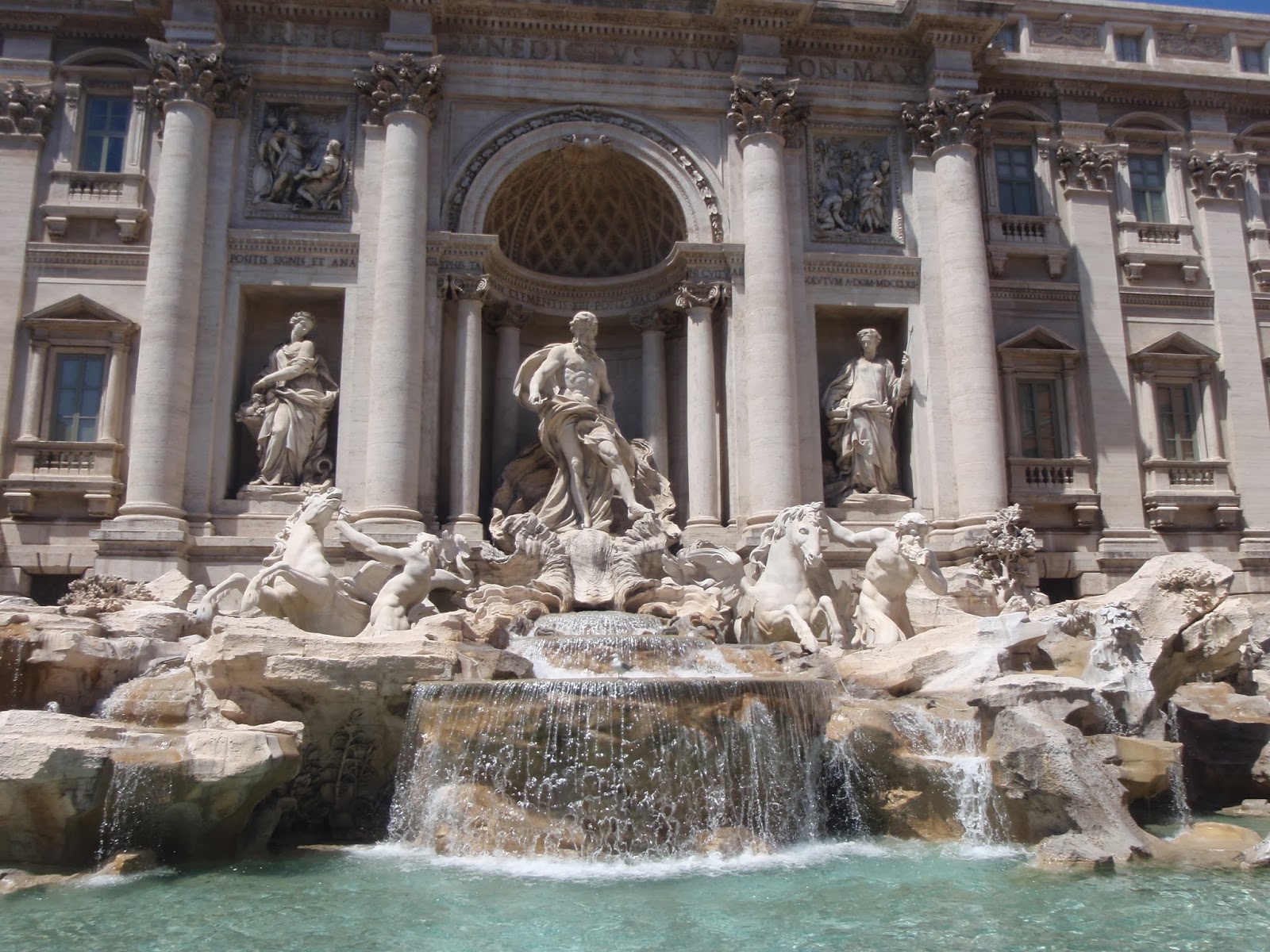 This is the Trevi Fountain, built in the 1700s. If you have a coin to spare (I don't think I did), then you are welcome to contribute to the estimated 2000-3000 euros thrown in there each day for luck. Thankfully they are supposed to donate this to the cities poor, but I think it also gets robbed pretty regularly so it's up to you.

A city that forms a country, within a city, within a bigger country- the Vatican is a great place to visit if you are
A. Religious
B. Into art, European culture or incredible architecture
or C. Trying to rack up your country count...

Make sure to dress appropriately- I got told off for having too much cleavage looking like this... 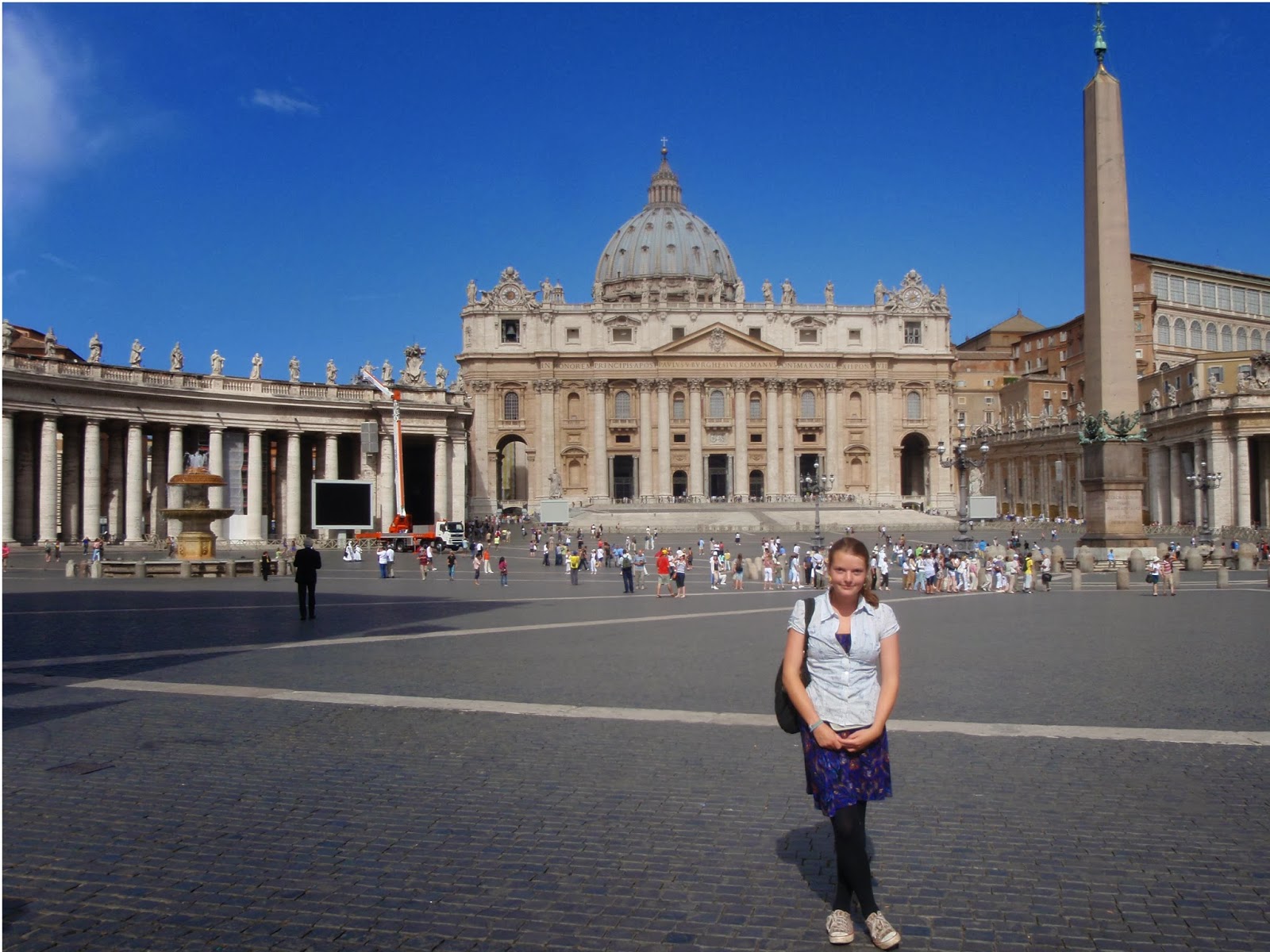 Remember, no photos in the Sistine Chapel- unfortunately very little space to relax and absorb Michelangelo's work either as an annoying recording reminds you to stay silent every few seconds in an excessive amount of languages...

As a city, Pisa hasn't got a lot to write home about, or at least not much that my 17 year old self could find, but it's pretty much obligatory to have your photo taken with the leaning tower. 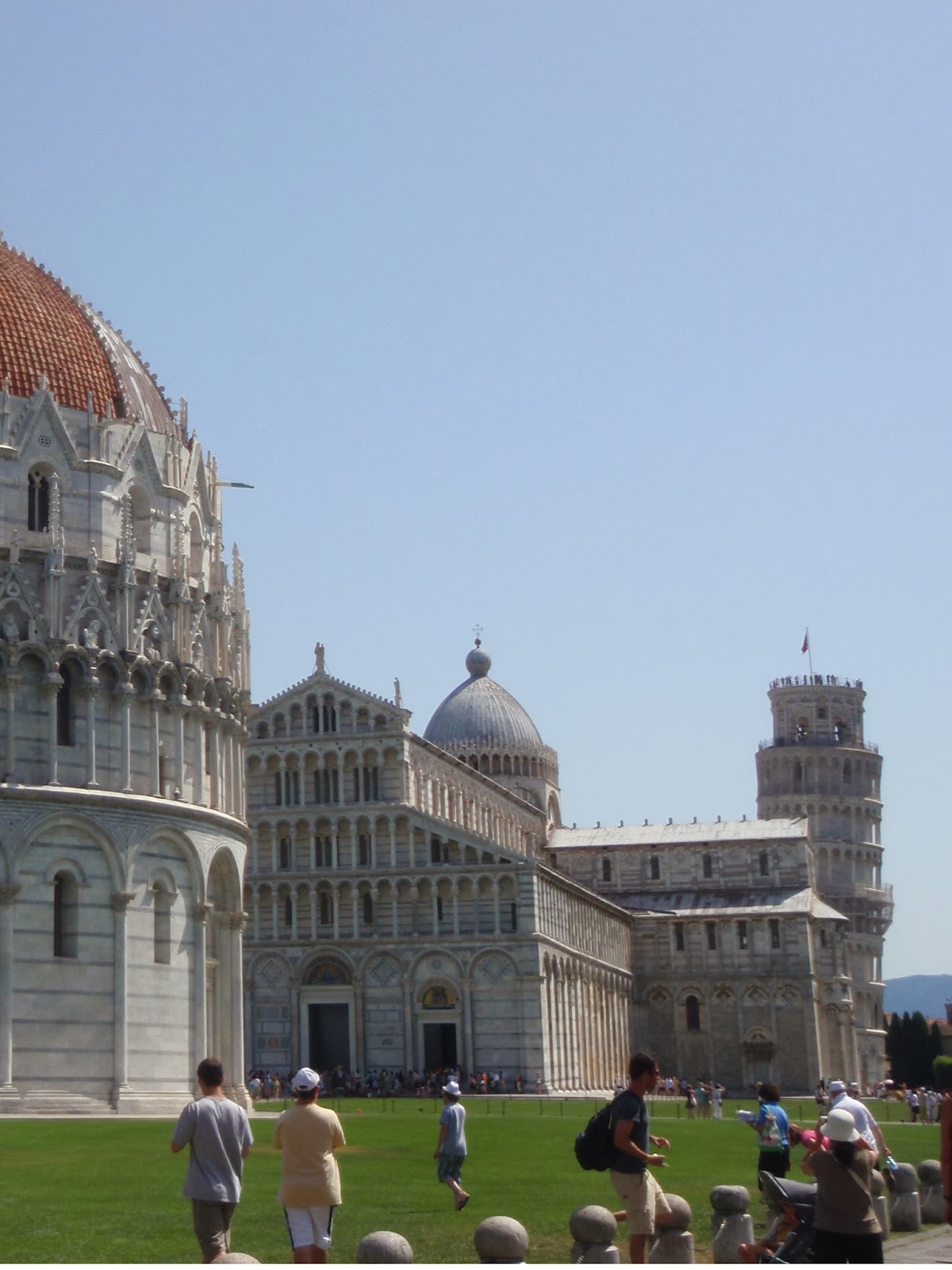 We had a fantastic time here drinking giant bottles of beer, dodging exploding cartons of sun-ripened milk and making friends with the other nutters at our campsite.

Our final destination and some well-earned beach relaxation after the craziness of Italy's bustling cities. La Spezia is pretty touristy, but once you get away from the main beach it's possible to find some peace and quiet.

The sea is beautiful... 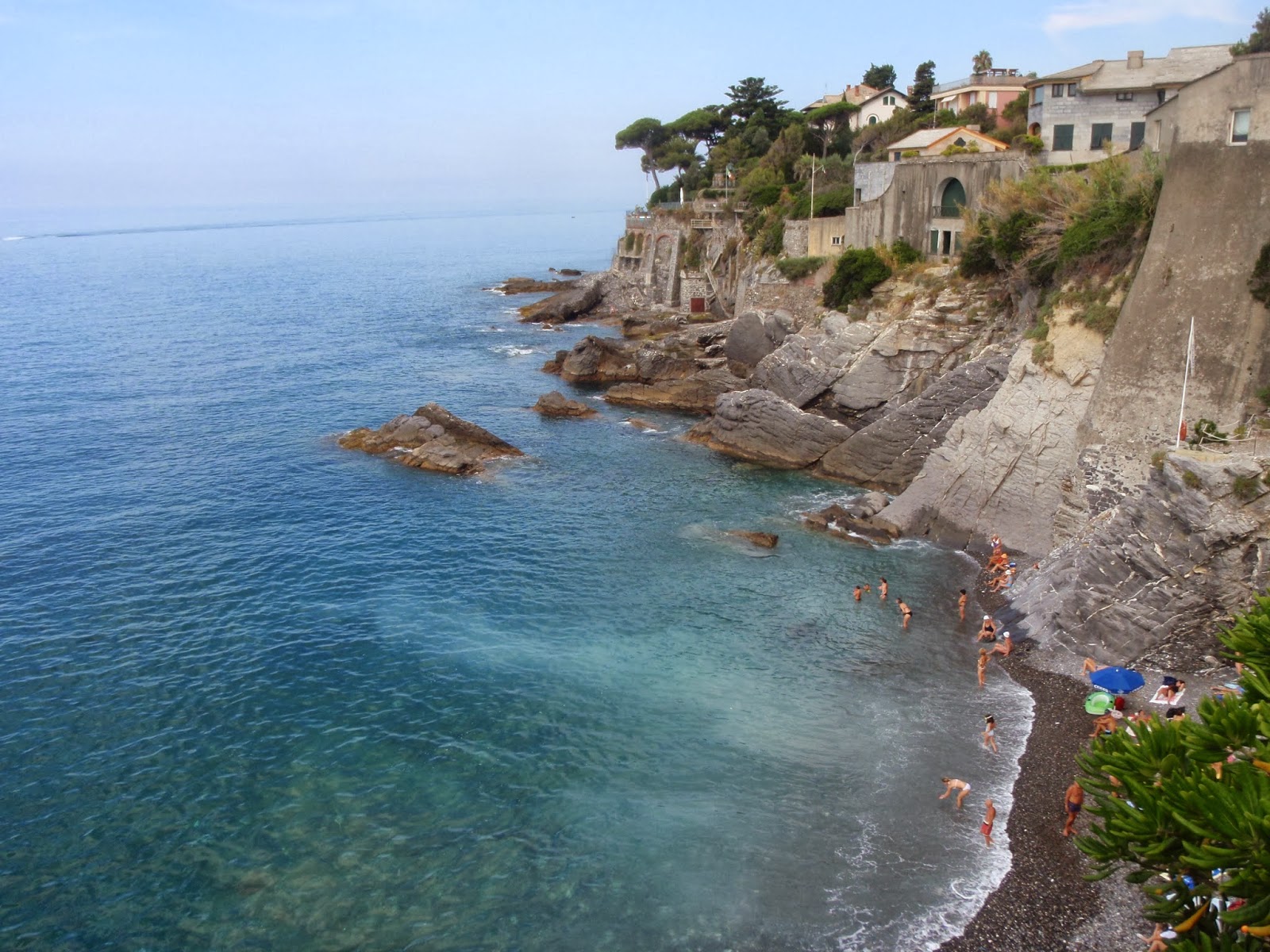 Finally, I'll leave you with this baby-faced photo of me on my 18th birthday. Sunshine, pizza and wine- what more could you want? 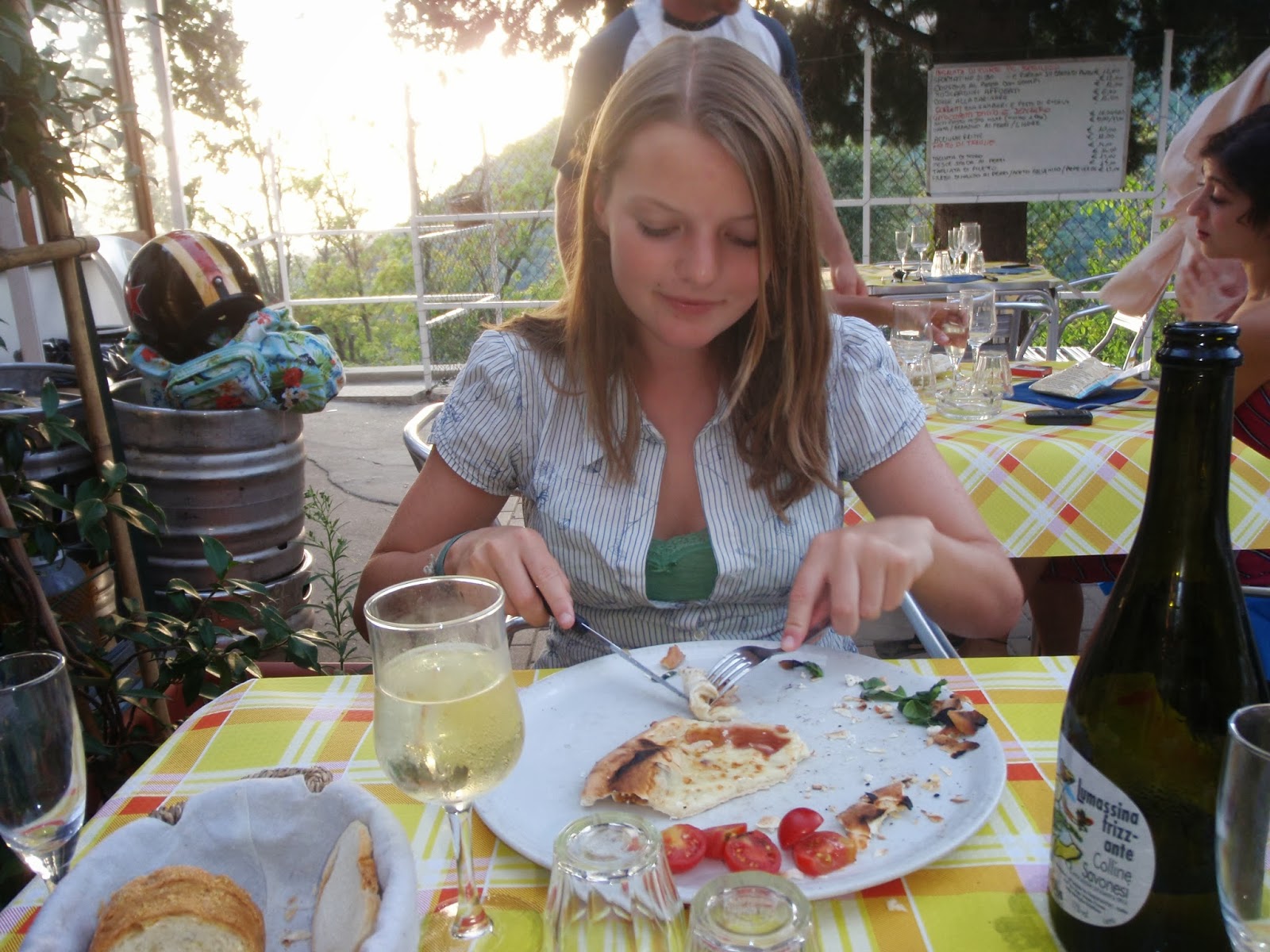 I've been obsessed with travelling ever since.