Pol Pot, the Khmer Rouge and the Killing Fields

Travelling around Cambodia, it is easy to forget the country’s troubled past. In my experience, Cambodians are some of the happiest, most helpful people in the world, so it is difficult to believe that less than forty years ago, around 21% of their population was wiped out under the Khmer Rouge dictatorship. Pol Pot, the leader at the time, enforced the policy of “Agrarian Socialism”, which theoretically would have made everybody equal, as workers in the countryside. Unfortunately, his methods did little for the cause of equality. Evacuating people from cities and forcing citizens to work on collective farms and labour projects in rural areas, Pol Pot was so paranoid about being overthrown that he was prepared to arrest and murder anyone intelligent enough to identify the flaws in his plans.


S-21, now open to the public and only a short tuk-tuk ride out of Phnom Penh was one of the prisons in which these people were detained. Although I had expected a harrowing visit, I was not prepared for the graphic, matter of fact way in which our guide presented the history: “This is where a prisoner was beaten to death with a metal pole” he said, pointing to a brownish stain on the ceiling, and it went on. We saw the remnants of the tiny, concrete cells in which people were confined, designed so that it was impossible to see the other inmates and with the metal attachments that held their chains still in place. Tales of torture and ridicule turned my stomach and the accounts and artwork from the survivors, which have been displayed on the otherwise bare grey walls, really help to transform the statistics into individuals. Worst of all was the array of photographs; mug shots of each person admitted, creating a confusing collage of emotions. Defiant young men, overwhelmed children and desperate mothers with crying babies all seem to share a look of courage, attempting to keep their dignity until the end. It was strange to think that our guide was about the age these children would have been, had they been allowed to grow up. Prison guards, who were often merely children when they committed the atrocities, now have to live among the families of those they killed. It’s hard to know who to have more sympathy for. 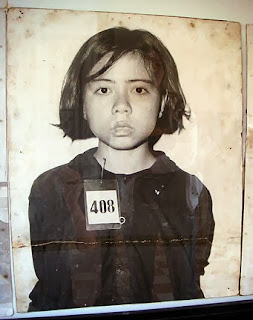 I'm afraid I borrowed this photo from Andy Brouwer here- http://blog.andybrouwer.co.uk/2009/08/never-before.html -as, I lost mine when my camera was stolen a few days later, but there are great panels of these photos, showing everyone who was held there.


Later, we walked around the Killing Fields, where thousands of people were taken to be beaten to death as a result of the Khmer Rouge’s insistence that bullets must not be wasted. Despite the collections of bones, small craters marked as mass graves and scraps of clothing in the ground, freshly washed up from the last rainstorm, it was hard to imagine that this was where the horrors occurred. The sun was shining, chickens were pecking at the bottom of one of the grassy holes and there were birds singing from a tree labelled as the place where babies were once clubbed to death. With the combination of my happy associations with sunshine and probably my subconscious denial of the truth, I found it hard to imagine how it may have looked just a few decades ago.

Cambodia is a beautiful country with a scarred past, and I believe we should only allow ourselves to enjoy it after understanding how lucky we are to visit during peaceful times. The government is still corrupt -- just try getting help at a police station -- but as far as I know, the general population is now safe and tourists can travel from place to place without much hindrance. In English schools, children don’t hear about the Khmer Rouge. We focus on Nazi Germany, where we, as a nation, were at least of some help in Hitler’s disposal. Unfortunately, after the Vietnamese disaster, the West wanted nothing more to do with South-East Asia and left Cambodians to their fate, at a time when they actually needed our intervention. Pol Pot was allowed to live freely until he died in 1998, reportedly peacefully in bed with his wife. At the time he was nearly 20 years older than the Cambodian average. He was never tried or punished.